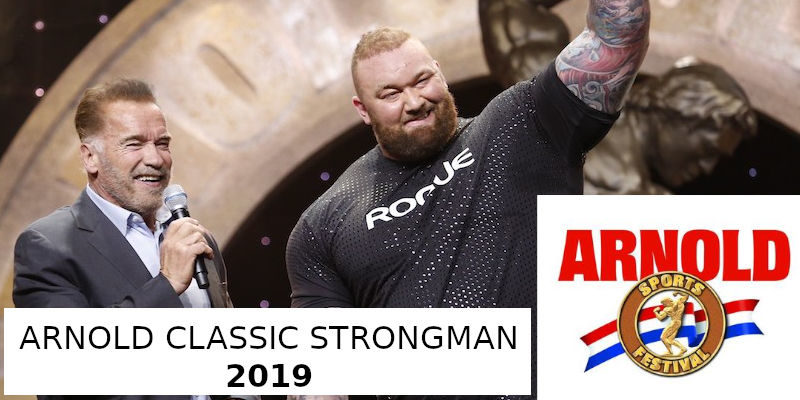 The Arnold Strongman Classic 2019 was in fünf Disziplinen bestritten:

Hafthor Bjornsson from Iceland won the Arnold Strongman Classic 2019 Title for the second year in a row with a dominant performance at Arnold Sports Festival 2019. The event also serves as a Arnold Pro Strongman World Championship.

Bjornsson took part in the Arnold Strongman Classic for the ninth year in a row. He won the title in 2018 after finishing second in 2017 and fifth in 2016. Thor, who is known as an actor, in "The Mountain" Game Of Thrones plays, dominated with three first places (ROGUE Elephant Bar, Husafell Stone Carry and Austrian Oak) and a second place (Conan's Wheel of Pain) in the first four disciplines. Thor Bjornsson was third in the Stone To Shoulder, but by then his second title was already secured.

Martins Licis from Los Angeles, who won two qualifying events in the Arnold Pro Strongman World Series, finished second and the emerging Mateusz Kieliszkowski from Poland came third. Licis won in the most anticipated discipline of the weekend and hit that Conan’s Wheel of Pain by an incredible 36.5 meters, Bjornsson finished second with 36.3 meters.

However, the highlight of the closing event was Kieliszkowski, who set a world record with five repetitions at 186 kg Stone To Shoulder area.