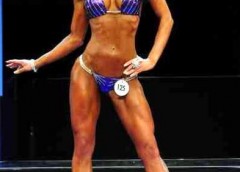 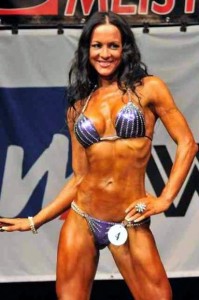 Q: How did you get into fitness?

Antonella: Actually, that wasn't my goal at all, after I had reached a point in my life, and because of my excess weight, I could no longer see and recognize myself, I decided to lose weight.
I got to know my coach Alex Stampoulidis through a friend and within a very short time I had reached my goal. Then, after my ex-boyfriend ended our relationship, there was only one thing to do, either to relapse
(because I used to eat when I felt bad) or set a new goal. So I decided to go to the bikini class.

Q: How long have you been training?
Antonella: In March 2011 I received my first nutrition and training plan from my coach, but it has been targeted for the bikini class since August 2011

Q: What is your workout like?
Antonella: I exercise 4 to 5 times a week. The plan is split into 2 units:
Mondays and Thursdays: stomach and legs
Tuesdays and Fridays: biceps, triceps, back and shoulder
Plus cardio twice a week.

Q: Do you pay special attention to your diet?
Antonella: Yes, I am very careful that everything goes according to plan and that I am not doing anything wrong. Of course, I am allowed to feast sometimes, but all too often I do not allow that, I cannot reconcile that with my conscience

Q: How does your diet change off-season and when preparing for a competition?
Antonella: Actually, not much has changed ... In preparation for a competition, the carbohydrates are gradually reduced.

Q: Who or what motivated you to take part in the bikini class?
Antonella: As mentioned before, after the separation of my ex-boyfriend, I was faced with the choice of new challenges in sport or the risk of becoming overweight again.
After my coach told me that he saw potential in me and that I had seen all the great girls from 2010 here at the IFBB and got to know a few of them, I wanted to see whether it was really feasible for me to achieve this.

Q: What are your future sporting plans?
Antonella: At the moment I am preparing for the EM and focusing specifically on it.

Q: What would you recommend to women if they want to look like you?
Antonella: Decide on the right and conscious diet in combination with strength training and deal with the matter in a disciplined manner.
Of course, it's best to start yesterday.