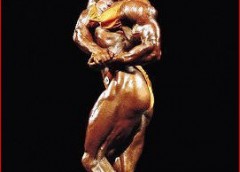 Q. You are very successful in powerlifting. You have a very successful sports studio in New York, you organize competitions ... Where do you get the energy for it from? What is your secret?
Francis Bev: There is no secret other than believing in yourself and wanting to do something good and being prepared to work harder than anyone else to achieve your goal.

Francis Bev: When I first started bodybuilding, women were guided by what men thought was good for them. In terms of their appearance and their training. I trained with an athletics coach who didn't care about appearance, only athletic performance. He also believed that women can perform far better than what they would have done before. And it was he who encouraged me and other athletes, women and men, to lift weights and develop strength. (His name is Franz Stampfl and he came from Vienna, Austria.) My appearance in "Pumping Iron 2" has shown women that they can do more and so women bodybuilding has developed further. Unfortunately, as women got bigger and tougher, they also became less marketable, so the sport was only made up of a group of hardcore fans who support it to this day. But it should never be a mainstream sport either

Q. You were the first woman to push 150kg. How did you train at the time? What weights did you train with?
Francis Bev: At the time I first pressed 150 kg (1980), I was running a lot to strengthen my cardiovascular system, as well as my speed. I was a competitive thrower, so I did a lot of plyometric training for the upper and lower body. Most of my weight training consisted of squats and bench presses, which I often did consistently several days a week. I used to do a few warm-ups, then move on to my weight training, doing 10 sets. For example: bench press at the time could be 10 reps with 60kg, 10 reps with 70kg, 10 with 80kg, 10 with 90kg, five reps with 100kg and 10 sets of six reps with 110kg. I did the same with the squats, 10 repetitions each with 60, 70, 80, 90 and 100 kg. Then five repetitions each with 110, 120, 130 and 140kg and finally ten sets of six repetitions with 150kg. When I finished the bench, I would go back to the squat and then the rest of the way. The hardest part first.

Q. Your enormous muscles sparked a heated discussion. How did you deal with the criticism? Did it motivate or hurt you?
Francis Bev: Obviously the lift gave me big, full muscles. I've spent so much time with other athletes that I was isolated from criticism against my body. However everyone has to prove it to themselves in the real world, now or later. At that time it was very tough because everyone saw only muscular shoulders, thick thighs and short hair, I was seen as a man, even if I am only 1.65 m tall. Fortunately, there were still my family, friends, and boyfriend who were very supportive of me, and I was so determined to do what I enjoyed, lift weights and be strong.

Q. What would you recommend to people who want to start bodybuilding?
Francis Bev: The first thing I would recommend to anyone is to only do it if they really love it. Don't do it because you want to make money or get famous. Second, have an apprenticeship or a trade with which you can earn a living. This is the foundation stone, then go to a gym with a passion to get the best out of yourself. Respect your body and always remind yourself that you can achieve more than you ever thought. Basic exercises are the best. Start building muscle mixed with exercises that develop all muscle groups. Eat healthy, good food, but keep enjoying your life.
If you don't enjoy working out hard any more, then it may not be the sport for you because you will never be as good at it as the person who loves it!